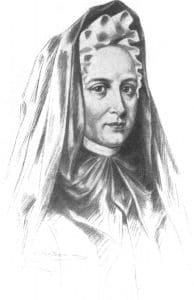 Jeanne-Marie Bouvier de la Motte-Guyon (1648-1717), known as Madame Guyon, was a French woman who exerted great influence to the mysticism both of her own time and of later ages.

Nevertheless, her teachings emphasized self-surrendering and quietness of the soul and thus were considered heretical from the Roman Catholic Church which classified them in the general “heresy” of Quietism (which shouldn’t be confused with “hesychasm” of Eastern Orthodox Church) a term which included a variety of beliefs which were never advocated by one and the same person; that is, different beliefs of different persons constituted the accusation of the heresy of Quietism, a victim of which has been also Madame Guyon who was imprisoned from 1965 till 1703.

François de Salignac de la Mothe-Fénelon (1651–1715), French archbishop of the Roman Catholic Church has been one of the devout defenders of her ideas and played a significant part in the spreading of her works which are still appreciated.