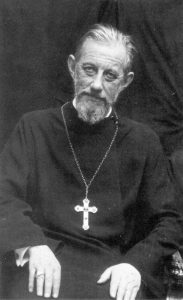 Evgraph Kovalevsky was born  in St. Petersburg, Russia, on April 8, 1905.
He was co-founder with Vladimir Lossky of the Brotherhood of St. Photius (1925) and the St Denys Institute (1944). He was ordained a priest of the Moscow Patriarchate by Metropolitan Eleutherius (Bogoyavlenky) in 1937.
In 1966, he was tonsured by Archbishop John Maximovitch, given the monastic name of Jean-Nectaire, consecrated bishop, and installed as the first Bishop of Saint-Denis in the modern era, making him the hierarch of the Western Rite diocese now known as the Orthodox Church of France. He reposed on January 30, 1970.